“Jesus would stone homos, stoning is still the law,” the Harlem church’s sign proclaimed. But for that noxious sign, I might never have discovered that New York City taxpayers foot a substantial water and sewage bill for the city’s 9,500 churches, synagogues and mosques.

The Atlah marquee from March 2014. Those bible verses support his claim, though Deuteronomy calls for the killing of anyone who does not worship the biblical god. ATLAH ministries photo.

Atlah World Missionary Church is under foreclosure. Not due to Pastor James Manning’s attention-seeking, homophobic rants, however. Instead, the church is being shut down because it has liens totaling more than $1 million. Nearly a fifth of that, about $200,000, comes from unpaid water bills. This is not too surprising, many religious organizations are financially reckless—mostly because they don’t have to file any financial paperwork with the IRS. Churches are a financial black hole.

As a result of Manning’s homophobia, everyone from the New York Times to the Daily Show is reporting on his foreclosure and his reason for not paying his water bill:

“We’re tax-exempt. We’re a church. Churches do not pay water bills—or any other kind of tax for the matter.”

Without Manning’s marquee of biblically-fueled bigotry, FFRF might never have known about this exemption. Now, we will be looking for ways to challenge the exemption because it is unnecessary, possibly illegal and probably very costly.

Of course, homeless shelters and hospitals and schools should be exempt and supported by the government when possible. They promote the public good. The same cannot be said of churches, both because state and church are to remain forever separate in this country and because they do not necessarily promote the public good. And if a church actually did do some good, through a homeless shelter or food pantry, that charitable arm would be rightfully exempt. There is no need for the house of worship itself to get free water. And there is no need to force nonreligious New Yorkers to pay for the holy water in Catholic churches or Christian New Yorkers to pay for foot-bathing in mosques.

If a house of worship cannot exist without the support of the state, it should not exist. Ben Franklin made this point more than 235 years ago:

“When a religion is good, I conceive that it will support itself; and, when it cannot support itself, and God does not take care to support, so that its professers are obliged to call for the help of the civil power, it is a sign, I apprehend, of its being a bad one.”

The legality of this exemption is dubious. The Supreme Court upheld tax exemptions given to religious institutions as part of a sweeping “exemption to all houses of religious worship within a broad class of property owned by nonprofit, quasi-public corporations which include hospitals, libraries, playgrounds, scientific, professional, historical, and patriotic groups.”

The New York City water exemption appears broad at first blush. But on careful inspection, only some nonprofits in a select few categories are exempt. There is much overlap with the Supreme Court’s list, but many are left out, including organizations similar to FFRF.

The total bill churches transmit to taxpayers is unclear, but it is likely substantial.

According to the NYC Independent Budget Office, “In 2010, the city issued exemptions to about 12,750 parcels with a total market value of $41.8 billion. Of these parcels, 57.5 percent were owned by religious organizations.”

New York City is missing out on a lot of revenue, both in property taxes and the absurd water/waste exemption. Perhaps it’s time for the city to revisit its rules that favor religion over nonreligion. In the meantime, Cardinal Timothy Dolan, who is dogged by shady financial dealings in the wake of the Church’s child-rape scandals, is enjoying the holy water in the $200 million St. Patrick’s Cathedral free of charge. But I doubt he’s thanking the taxpayers. 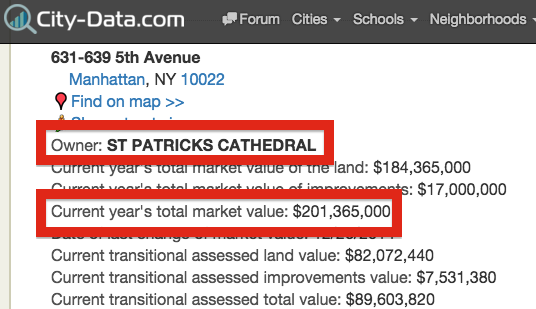