FFRF has long dealt with anti-atheist discrimination. Many people don’t realize this is an issue, but we know better because we deal with it every day. It’s one reason we successfully pushed the city of Madison, Wis., to amend its civil rights ordinances to include nonbelievers.

It’s also why, on behalf of FFRF lifetime member and Co-President Dan Barker, we’re suing House Chaplain Patrick Conroy, a Roman Catholic priest, for discriminating against atheists by refusing to let them give invocations.

We filed our federal lawsuit on the two-year anniversary of the Supreme Court decision on which the suit is based, Greece v. Galloway. It also happened to fall on the National Day of Prayer. The lawsuit begins by quoting from the Greece decision:

The Supreme Court recently upheld the legislative prayer exception to state church separation largely because the town involved “at no point excluded or denied an opportunity to a would-be prayer giver” and “maintained that a minister or layperson of any persuasion, including an atheist, could give the invocation.”

Sadly, the discrimination practiced against Barker as an atheist is nothing new. Conroy’s antiquated idea of equality and First Amendment freedoms desperately needs correcting. More than 110 years ago the House chaplain refused to allow another atheist to speak in the Capitol, also because she was an atheist.

The Reverend William Henry Milburn, a Methodist minister who served as chaplain in six different Congresses, was the House Chaplain in 1854. He also used that office to pontificate and discriminate. 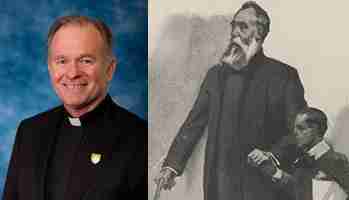 Ernestine Rose and Susan B. Anthony had traveled to Washington, D.C., to speak truth to power. While most Americans are familiar with Susan B. Anthony, few people today remember Rose, although she was a household name in her era. Rose, the only child of an orthodox rabbi, was a Polish immigrant, an early champion of women’s rights, and, at a time when “atheist” was a word rarely spoken, was its vocal defender. She delivered a famous speech, “A Defense of Atheism,” in 1861, which can be read in Women Without Superstition, the first anthology of women freethinkers, featuring more than 50 rebellious ladies, edited by FFRF co-president Annie Laurie Gaylor — who brought this parallel censorship of an atheist by a chaplain to my attention.

The chaplain refused to let Rose speak in the Capitol because she “was not a member of some religious society” and “failed to recognize the Divine.” That sounds an awful lot like the reason the current chaplain gave for barring Dan Barker 110 years later.

Susan B. Anthony kept a diary and recorded for March 24, 1854 that she and Rose:

Asked the Speaker of the House for the use of the Capitol on Sunday A.M. he referred me to Mr. Milburn the Chaplain, [we] called on him[. H]e could not allow her to speak there because she was not a member of some religious society—I remarked to him that ours was a country professing Religious as well as Civil Liberty & not to allow any & every faith to be declared in the Capitol of the nation, made the profession to religious freedom a perfect mockery, though acknowledges the truthfulness of my position he could not allow a person who failed to recognized the Divine, to speak in his place.

Susan B. Anthony’s diary entry of the 1854 encounter. Provided by the Wisconsin Historical Society, from the microfilm edition of the Stanton & Anthony papers.

That’s an exchange I’d like to have seen. Susan B. Anthony was absolutely right: allowing discrimination along religious lines at the very seat of our government — in the U.S. Capitol — makes a mockery of the First Amendment. James Madison initially thought a bill of rights unimportant (though he would later change his mind) because he thought words on paper would not prevent oppressive violations like this: “repeated violations of these parchment barriers by overbearing majorities,” he called them. Madison also opined that “the establishment of the chaplainship to Congress is a palpable violation of equal rights, as well as of Constitutional principles . . .” Though the Supreme Court disagreed with the Father of the Constitution and Bill of Rights, Chaplains Milburn and Conroy have proved Madison right.

Until a court has the courage to agree with Madison and strike down the chaplaincies as unconstitutional, these chaplains have a single, codified job: to pray. Of course they claim they do more, like ministering to congressional members, but they have to justify their huge salaries and outlandish budget somehow.

Astute observers, such as MSNBC’s Steve Benen, have pointed out that chaplaincies may have been more defensible back when Washington, D.C., was a swamp with few places of worship. “In modern times, however, congressional chaplains rarely do anything noteworthy, and religious members of Congress are in contact with their own faith leaders in their own states and districts. Chaplains deliver congressional prayers, often to rooms that are largely empty, but otherwise, they’re generally neither seen nor heard outside Capitol Hill.” In practice, chaplains do little beyond pray.

And actually, even the idea that chaplains used to minister to Congress is fallacious. In his autobiography, Chaplain Milburn himself crows about his easy duties:

The duties of the chaplaincy were simple enough. To pen the two Houses of Congress with prayer daily, to preach in the Hall of Representatives on Sunday morning; and as there were two of us to perform these offices, there was abundant leisure to follow our bent.

Not much has changed. As Benen correctly observes, if anything, chaplains’ ministerial duties are not needed today. Reps can text, email, call, Skype, FaceTime, or fly home to their districts and talk to their home minister or choose from among the 1,400+ tax-free churches and ministries in D.C. There’s a reason the House and Senate rules give the chaplains only one duty: it’s because they’re not needed for anything else. And even then, their single duty is performed in “rooms that are largely empty.”

Milburn made $250.00 in 1854. That’s about $7,270 today according to MeasuringWorth.com.* Conroy makes $172,500 each year — about 24 times what his predecessor made. Both Milburn and Conroy had one basic duty: to pray. Both Milburn and Conroy abused their positions to discriminate against people who are not religious. Not much has changed, except that discrimination pays better. Help us change that.

*This site provides a wide range of estimates. We used the Consumer Price Index value because the site indicates it is best for this purpose: “If you are asking about the current equivalence of what someone earned in the past, and you are thinking in terms of the household items that person might buy, then use the CPI.”