Sheriff Travis Allen of Jefferson County, Ill., is charged with enforcing the law but he doesn’t seem to understand it. Allen is one of those sheriffs who thinks putting “In God We Trust” on patrol cars is both patriotic and politically incorrect (how does he not see this contradiction?). Now he has stepped into another religious controversy.

In a January 22 letter, FFRF explained to Jefferson County officials that they could not legally display two nativity scenes in front of their courthouse. Allen responded to our letter—on his Facebook page (it appears below). FFRF will be formally responding. In the meantime, this seems like the more appropriate venue to deal with a sheriff’s social media posts.

Sheriff Allen should consider spending less time in this pose and more time protecting all citizens, including atheists.
LifetimeStock/Shuttestock.com

First, we’d like to thank the sheriff for admitting, in writing, that he, a government employee, put up not one, but two nativity scenes for religious reasons. That should be helpful down the road.

Second, we applaud and share the sheriff’s displeasure with “half truths [sic],” but we find it odd that he would include so many in his letter.

For instance, Allen claims that “Christmas is a FEDERAL holiday that celebrates the birth of Jesus Christ,” which shows his ignorance of both the bible and federal law. You’d think if Jesus were actually the son of a god, people would have recorded the date of his birth. It seems kind of important. But no historical record mentions the birth of Jesus. And the bible never actually says when Jesus was born, although it does note that shepherds were living in the fields with their flocks at the time, implying Spring. Luke 2:7-8. Most informed people, including many denominations, agree that according to his own story, JC wasn’t born in December.

Nor does federal law state that the holiday is to celebrate “the birth of Jesus Christ.” In fact, the Supreme Court has explicitly rejected this exact argument, almost laughing it off: “This argument obviously proves too much.” Cnty. of Allegheny v. Am. Civil Liberties Union Greater Pittsburgh Chapter, 492 U.S. 573, 601 (1989).

In that same decision, the Supreme Court drew a clear line, “The government may acknowledge Christmas as a cultural phenomenon, but under the First Amendment it may not observe it as a Christian holy day by suggesting that people praise God for the birth of Jesus.”

And now, in writing, Allen has admitted to violating this principle. He is not celebrating a cultural Christmas while acting as sheriff, he is doing precisely what the Supreme Court said the government may not do. He “will continue to celebrate Christmas” as “a FEDERAL holiday that celebrates the birth of Jesus Christ.” In other words, the official tasked with upholding the law is promising to continue violating the law.

Allen also said that he “could really care less about your Wisconsin based organization or your 700 Illinois members!” He may not care about all his citizens, but that just shows what kind of person he is. We see this all the time: people denigrating atheists because they think they can get away with it. Would the sheriff dare to say that he didn’t care about 700 members of a minority religion (Jews, Buddhists) or race? No, he’d never do such a thing. Shame on him for treating nonbelievers with such contempt.

Allen needs to get his priorities straight. 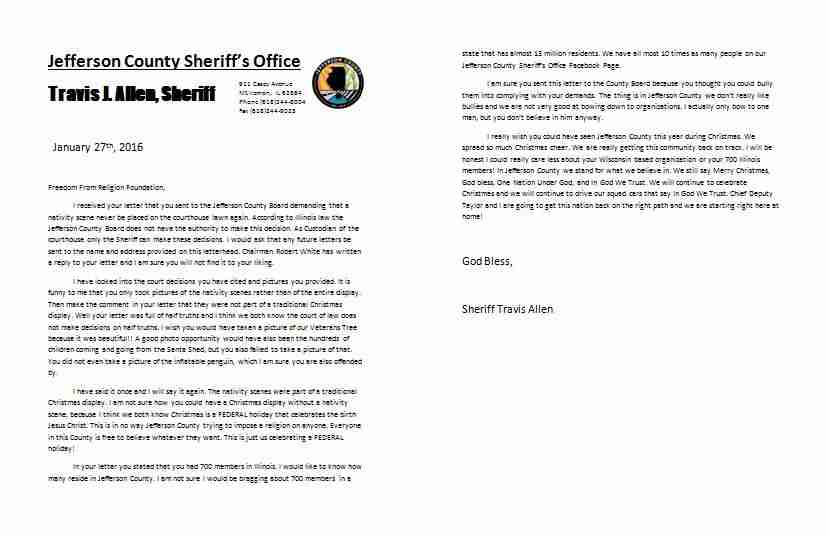