After Justice Antonin Scalia’s death, Senate Majority Leader Mitch McConnell immediately promised to obstruct any replacement. McConnell made his statement “about an hour after Scalia’s death in Texas had been confirmed,” before President Obama announced his intent to nominate someone to fill that vacancy.

McConnell was singing a different tune in 2005.

In a speech on the Senate floor, McConnell chastised his opponents for doing the very thing he just promised to do: “For the first time in 214 years, they have changed the Senate’s ‘advise and consent’ responsibilities to ‘advise and obstruct.’” He wanted “to restore the principle that, regardless of party, any President’s judicial nominees, after full debate, deserve a simple up-or-down vote.”

There are good reasons not to confirm a federal judge, primarily that he or she is unqualified. Candidates’ abilities to be fair and neutral must be vetted, their qualifications checked, their backgrounds pristine, and their finances disclosed. Anything more looks like playing politics with our justice system.

McConnell’s flip-flop on non-partisan confirmations is political, not principled.

Time is not a valid excuse for any obstruction. The longest Supreme Court confirmation process occurred in 1916 when the Senate held 19 public hearings over 125 days before confirming Louis Brandeis. Justice Clarence Thomas took 99 days to be confirmed. Rehnquist, Kagan, Alito, and Scalia himself all took between 80 and 90 days. President Obama has more than 330 days left (updated count here).

Nor can any obstructionist seek refuge the “Thurmond Rule,” the informal, oft-ignored suggestion that a president’s judicial appointments should be limited in an election year. Using a recess appointment, Eisenhower named William Brennan to the high court during an election year. Brennan was later confirmed. Since 1900, at least six Supreme Court justices have been confirmed during an election year and there were many more before that. (John Adams even appointed John Marshall, the man who solidified the court’s power in Marbury v. Madison, after Adams lost re-election). 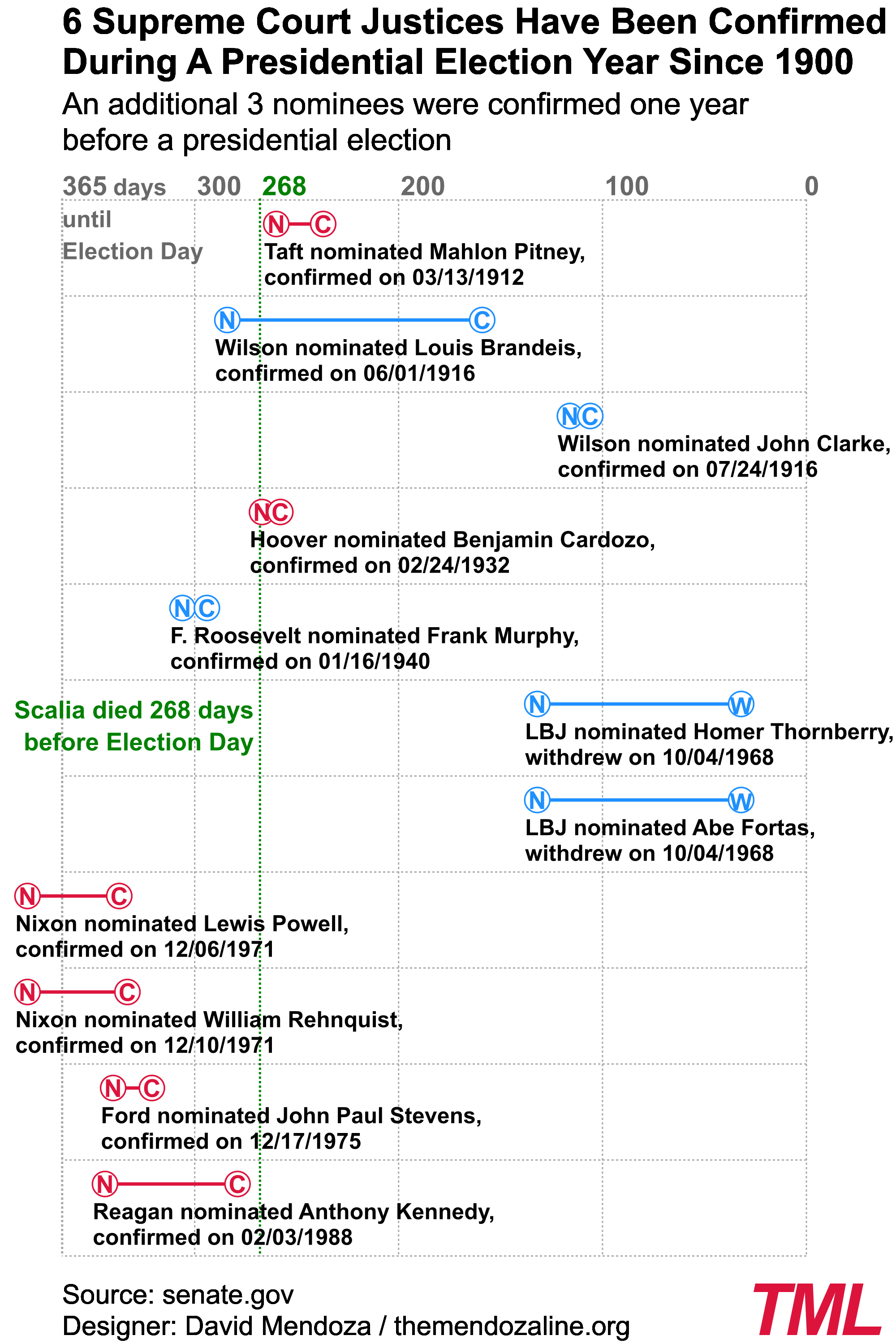 The “N” signifies when the nominee was officially nominated and the “C” or “W” indicate whether the nominee was confirmed or withdrew themselves from consideration before the Senate could vote. The data for the chart comes from the Senate’s official website. Chart by David Mendoza. www.TheMendozaLine.org

Included in those six is Justice Anthony Kennedy, the court’s pivotal player and swing vote prior to this vacancy. Kennedy was confirmed in February 1988, an election year. Reagan nominated Kennedy with the election less than a year away and his confirmation hearings took 65 days.

When Reagan announced Kennedy as the nominee, he explained why the appointment was important, even in an election year:

[We need] to join together in a bipartisan effort to fulfill our constitutional obligation of restoring the United States Supreme Court to full strength. … I look forward to … prompt hearings, conducted in the spirit of cooperation and bipartisanship.

Reagan was right. McConnell circa 2005 was right. Senator Lindsey Graham, who sits on the Judiciary Committee, was right when he took to the senate floor in 2003 to condemn the Senate’s “desire to make the court go one way versus the other and we have hijacked the Constitution for political reasons. . . . If we keep up this practice, it will do long-term damage to this country.” He reaffirmed “the Lindsey Graham approach” in an interview with George Stephanopoulous this morning:

When an election is over, the president wins, they have a chance to send qualified nominees of their philosophy to the Senate and I will vote for them if they’re qualified even though I would not have chose them.

Senator Charles Grassley, who heads the Judiciary Committee, said on his own website that “History has proven the wisdom of having the President place judges with the support of the majority of the Senate. That process ensures balance on the court between judges placed by Republican Presidents and those placed by Democrat Presidents. . . . It’s time to make sure all judges receive a fair vote on the Senate floor.”

And yet, McConnell has promised to ignore qualifications, Graham has predicted there is almost “zero” chance of a nominee getting through, and Grassley now thinks “it only makes sense that we defer” to the next president.

If the Senate wants to honor Scalia, they ought to focus on their constitutional duty. Scalia considered himself an “originalist” who was faithful to the original document. Article II, Section 2 reads:

The President . . . shall nominate, and by and with the advice and consent of the Senate, shall appoint . . . judges of the Supreme Court.

Like it or not, America has a duly elected president. It is his duty to nominate a new justice and the Senate’s duty to vet that nominee’s qualifications.

John Oliver summed it up best on Last Week Tonight:

“If you really loved Antonin Scalia, you wouldn’t honor his memory by desecrating the thing he loved the most[, the Constitution.] Think of Scalia like a Brita water filter or a child’s hamster: Why don’t you honor his entire reason for being by swiftly and efficiently replacing him?”